The cheerful dandelion’s many uses and virtues 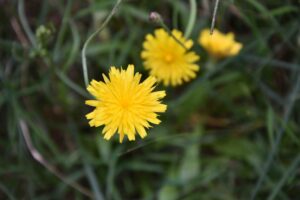 Dandelions are considered a herb by some and a weed by many but the sunny yellow flower with fluffy silver seed heads welcomes the beginning of spring and has many qualities, benefits and culinary attributes.

The plant, which is native to Europe is thought to have evolved more than 30 million years ago and was initially introduced to America as a food crop. They can now be found growing in the temperate regions of North America, South America, New Zealand, Australia, Southern Africa and India and commonly colonise disturbed environments.

The common name ‘dandelion’ comes from the French words ‘dent de lion’ meaning ‘lions tooth’. Some believe it’s in reference to the plants spikey leaves while others believe it refers to the plants long tap root, which is difficult to remove from the ground. The perennial plant produces one to ten flowering stems of up to 40cm in height. The dandelion flower is actually a bouquet of more than 100 very small flowers collected together into a composite flower head and each flower is a perfect seed producing component.

The dandelion’s bright yellow flowers are visited by many types of beneficial insects. They attract pollinators and provide an important early food source for bees. 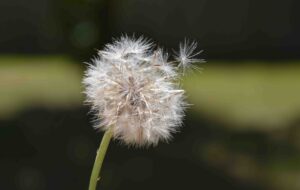 While the plant has many benefits, it also has interesting characteristics. The flowers open during the day when the sun is out and close again in the evenings. They also close on dark overcast days when pollinating insects aren’t flying. The flower stems stand erect until later in the season when they bend towards the ground to protect the seed head while it ripens. The flower stalks then stand up again and the head opens ready for the seed to disperse. The attractive seed heads often attract children who blow them into the air believing it helps fairies travel and they can then make a wish.

Dandelion plants have been used throughout history as a herbal medicine across Europe, China and by indigenous Americans in an attempt to cure various ailments including skin problems, heartburn, liver and kidney disease, upset stomach, abscesses, fever, diabetes, reduce eye inflammation and provoke diuresis.

The plants are rich in nutrients including protein, calcium, iron, Vitamins A and C. The leaves, which are high in vitamin C, have more iron and calcium than spinach. 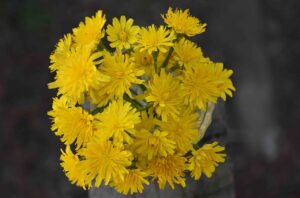 While dandelions are popular as ornamental flowers, the flowers can also be used to make dandelion wine, dandelion jam and jelly. Some people deep fry dandelion flowers in a light batter for a tasty snack.

Unopened dandelion buds and young leaves can be eaten raw in salads and have a slightly bitter taste similar to mustard greens. The leaves need to be picked before the plant blossoms so they aren’t too tough or bitter. Older leaves can be cooked, steamed or added to soups and stews. Some people add sautéed chopped onions and a small amount of garlic to the leaves when cooking them. 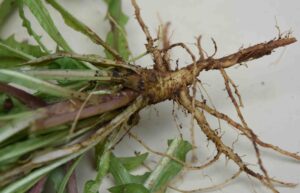 Dried leaves can be infused in hot water to make dandelion tea. The washed roots of the plant slowly roasted in the oven on a very low temperature or put in a food dehydrator if you have one, can then be ground up and brewed into caffeine-free dandelion coffee.

Removing the plants from the ground with the roots in tact can be done more easily with a kitchen fork. When picking dandelions make sure they are from your own garden so you know they haven’t been sprayed with any chemicals or visited by pets.

‘Dandelion and Burdock’ is a drink that has been popular for a long time in the United Kingdom. It was originally a type of mead made from fermented dandelions and was consumed during the middle ages. It’s believed both plants help liver function. The fermented drink has since evolved into a carbonated soft drink that is still commercially available.

Dandelions are also used in Saison ale called Pissenlit made by Brasserie Fantôme in Belgium. The French nicknamed the plant Pissenlit, which means ‘wet the bed’ due to its diuretic effect.

Some species of dandelion produce a milky substance that can be used to make latex or natural rubber and were used as an emergency source of rubber during the Second World War. The Russian dandelion Kok-Saghyz gave the best yields producing up to 200 kg of rubber per hectare.

The dandelion is also symbolic and throughout history, the plants characteristics and it’s happy, sunny yellow flower has been the subject of many poems, songs painting and stories.

It seems the dandelion seen to many as an annoying weed actually has many virtues and uses. Before mowing them down, consider the many ways they can be used and if you do mow them, perhaps wait until later in the season when the flowers drop to the ground and the seeds are ripening, so bees and other beneficial insects can make full use of them first.